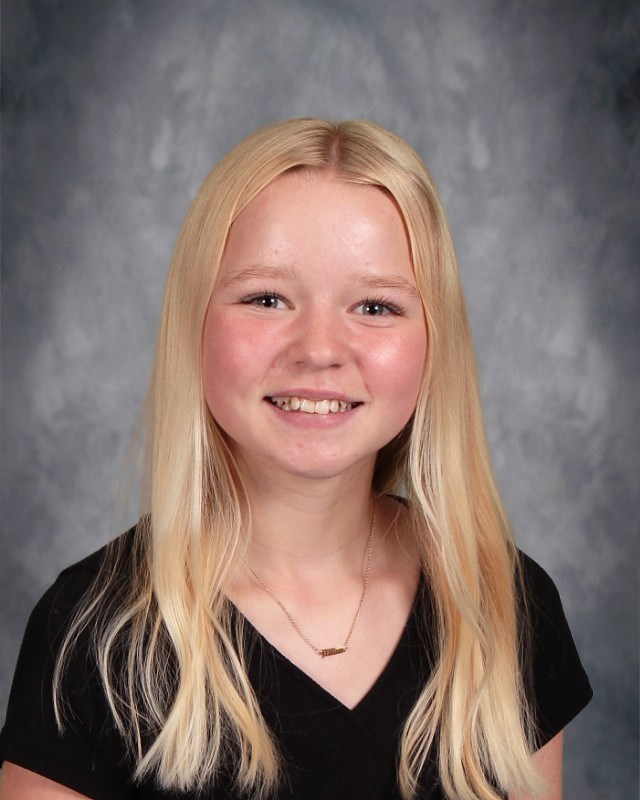 JH Student of the Month - November

Jillian Porter, the daughter of Eric and Cassandra Porter, was named the November Junior High Student of the Month.  She is in the eighth grade.  Her teachers nominated her because she is a good leader, kind to others and does well when working with others in the classroom.  She does an excellent job on all assignments, but especially on presentations and group work!  She is involved in softball, volleyball, scholar bowl, track manager, and New Hope Church.  Math is her favorite subject.  She enjoys the challenge of the subject and really likes her teacher, Mrs. Manhart.  In her free time she enjoys playing with her dogs, sports practice, boating, water skiing, tubing, swimming, hanging out with friends, beating James (her older brother) in ping pong and lastly playing games with Addie (her twin sister).  In the future she wants to carry on her family tradition and attend ISU, get an MSN and BSN, and maybe be a nurse practitioner.

Now to share some fun facts. If she ever won the lottery she would spend it on college tuition and invest the rest.  She also had already promised her dad that if she ever won the lottery she would buy him a couple of nice old cars and a new truck.  Next, if a genie was able to grant her one wish she would wish that good dogs never have to leave or die.  Her sister was bitten by their Australian Shepard and it was hard on them when they had to rehome him.  If she had one super power she would want to be able to read people’s minds.  She has always wondered what people are thinking.  It would also be helpful to understand little kids that don’t know how to say what they are thinking.  So far, she has two favorite experiences in school.  The first being the last day of school when they get to spend the whole day outside and the second being when her softball team went to state last year.

Copyright © 2023 Stewardson-Strasburg CUSD 5A. All rights reserved. Powered By Thrillshare